If We Encounter a Man of Rare Intellect, We Should Ask Him What Books He Reads | Five For Life 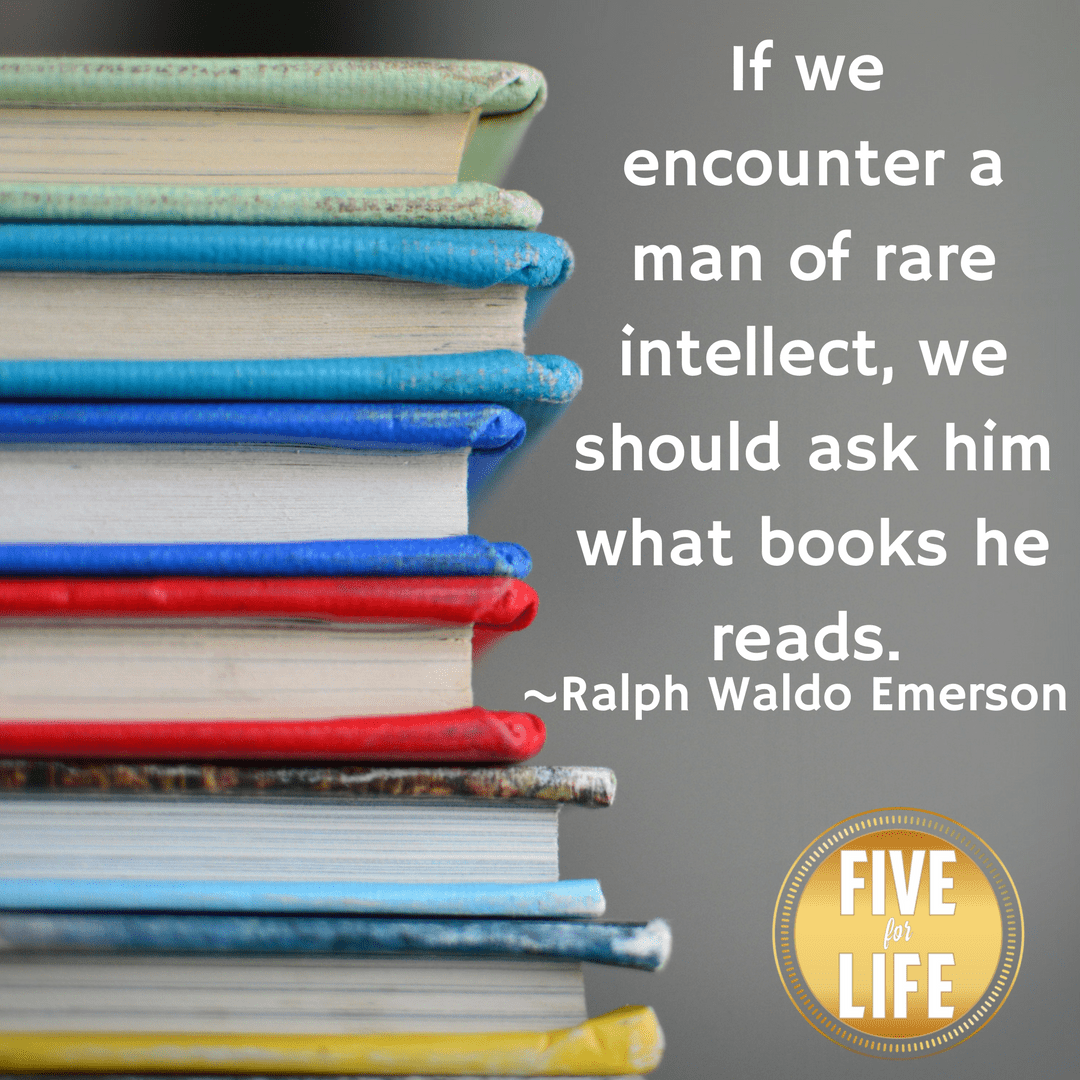 If We Encounter a Man of Rare Intellect, We Should Ask Him What Books He Reads

I love to read.

And I will (reluctantly) admit that I often like to read about werewolves, faeries, druids and yes, even vampires.

I have challenged myself this year to read motivational/business books to help with my new business endeavors and started with a classic called,  The Magic of Thinking Big, by  David  J. Schwartz.  Published in 1959 it has some quaint language and pre-internet sales strategies, however, the main messages of the power of positive thinking and visualizing what can be are timeless.

When I think of books that have impacted my life, it’s hard to pick just a few. Here is a short list (in no particular order) :

*Pride and Prejudice by Jane Austen. This was the first “big, real, classic” book I ever read. It is in a word, sublime. It’s graced the tops of many “most-loved” book lists for more than a century.

*Harry Potter and the Sorcerer’s Stone  by J.K. Rowling.  Much like Star Wars brought together my generation with my boys,  the Harry Potter series connected us in a way that I  don’t think we’ll see again in our lifetimes.

*A Short Guide to a Happy Life by Anna Quindlen. It’s short, it’s sweet and still makes my eyes water whenever I read it.

I asked around to friends, other midlife women and family and here are some other titles that people said reading “changed their lives”.

*The Women’s Room by Marilyn French. This one was mentioned more than once and  Elle comments, “makes me realize just how important feminism and the Women’s Movement has been in America.”

*A Walk Across America by Peter Jenkins. Says Peggy, “it revived my wanderlust and gave me the courage to do what I needed to do.”

*100 Years of Solitude by Gabriel García Márquez. Mentioned by more than one person, and Cathy says “should be required reading.”

Three books, all that raise questions about what makes a meaningful live when faced with terminal disease were mentioned by multiple people. And all of these are great and if you have read one of them, you’ll really enjoy the others.
*When Breath Becomes Air by Dr. Paul Kalanithi

*The Last Lecture by Randy Pausch

*Tuesdays with Morrie by Mitch Albom

Some classics we read in our youths that have stuck with us:

* Little Women by Lousia May Alcott

*The Phantom Tollbooth  by  Norton Juster

Five For Life
Previous Post 3 Ways Stress Takes A Toll On Your Body Next Post Successful Aging: Finding solutions to loneliness and isolation in older Americans

Powered by Convert Plus
We use cookies to analyze traffic and improve your experience. Just wanted to let you know! We'll assume you're ok with this, but you can opt-out if you wish.Accept Read More
Privacy & Cookies Policy
Necessary Always Enabled